Two weeks ago I had the opportunity to attend a Dietitians of Canada continuing education event at North 53. I have been meaning to check out this spot for months, with an extra push since making the top 10 list in Enroute Magazine’s – Canada’s Best New Restaurants 2014. After receiving an email from a colleague about the Pure Prairie Eating Plan hosted at North 53 I couldn’t turn down the opportunity to check out a new restaurant, network with other dietitians, and learn more about the work that Dr. Chan and Dr. Bell have been doing on translating the recommendations from Canada’s Food Guide and applying them to whole foods that are commonly grown and consumed in the prairie provinces.

When I arrived the room was set up as one long communal table, which worked really well for meeting others who were attending the event. I was eager to find out what we would be eating that night (as it was a five course meal!!) and I was happy to see a menu printed for each guest that outlined the evening. The first course was cream of broccoli soup and Avonlea cheddar biscuits. The second course was sous vide short ribs with charred onion, red pepper sauce, and aligot potato. The third course was a homemade yeasted doughnut with maple ice cream. The fourth course was sunflower seed caramel, apple crab pate de fruit, and rum spiked baby brioche. WOW. They definitely did not feel the need to lighten things up for the room full of dietitians. I’m all for indulging once in a while but this was over the top! 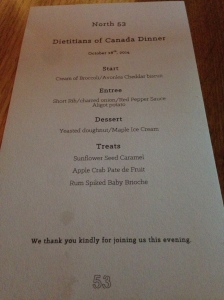 The broccoli soup tasted as if the broccoli had been charred prior to being incorporated into the soup creating an extremely smoky flavour. The soup was served with the biscuits, which were baked fresh and brought directly to the table. When you broke apart that biscuit all you could see was melty delicious cheese. I don’t think I’ve ever had a biscuit that felt like it was half flour and half cheese before, but it was unbelievable. I love cheese. Needless to say, I could have probably stopped eating after the first course and been satisfied for the rest of the evening. 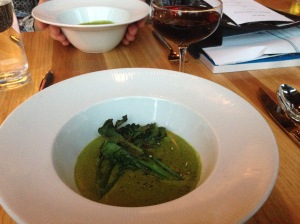 Next up was the short ribs. Does a charred onion count as a vegetable with dinner? Maybe the broccoli pureed with cream was the vegetable..whatever, I’m over it. The meat was tasty and not overly fatty (which I was kind of expecting with short ribs) and served with the most decadent mashed potatoes ever. I’m guessing they were 30% butter, 30% cheese, and 30 % potato. This place must have a HUGE dairy budget. I don’t think I had any red pepper sauce on my place like it said in the menu but maybe it was just a glaze on the short ribs? 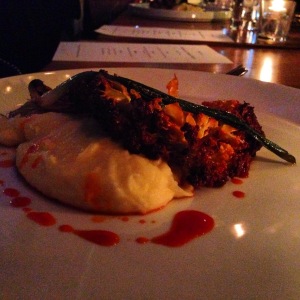 After a bit of a break the doughnuts came out. They were freshly fried, coated in sugar and paired with maple ice cream. At this point I was surprised that I was even considering eating one more bit. But fresh doughnuts? Come on. You can’t pass that up. I’m a sucker for ice cream and this one was no exception. It was SUPER creamy. I wonder if they make it in house or get it from a local supplier like Pinocchio’s? Either way it was delicious. The doughnut on the other hand didn’t really float my boat. They were quite hard on the outside, hard to cut through, and less fluffy than I was expecting from a yeast doughnut. Don’t get me wrong, I couldn’t do a better job myself but at this point it just wasn’t worth the calories, so I only ate a few bites.

Dessert number two! They servers brought out beautiful wood platters full of treats. At this point I snuck away to the washroom and asked for a to-go box on my way out. There was no way I could fit those little sugar bombs in my tummy. I ended up offering them up to my fiancé when I got home but boy did they look great!

I had an awesome time at North 53 and I would definitely go back to try out their regular menu. I also saw that they had a second grand opening with a new menu and new chef! It’s great to see the strong focus on local ingredients and creative flavours!