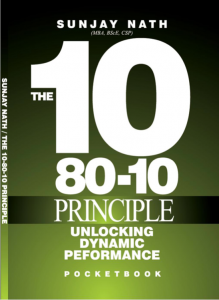 On Friday and Saturday I had the opportunity to attend the 5th Annual Food Matters Conference at the University of Alberta Hospital. There were so many amazing topics and speakers but I can honestly say that one particular session completely changed my life. I’m not quite sure how I have made it 27 years without hearing about this incredible approach but, I am going to do my best to share it with everyone I know.

The first seminar I attended on Friday was The 10-80-10 Principle: Strength Based Approach to Leadership given by Sunjay Nath. Sunjay is an international speaker who shares insights on leadership and performance. I don’t think I have ever heard a more dynamic, engaging and hilarious speaker in my life. The 3 hour session was over in a blink of an eye. Here is a short video that I found on his website that does a good job of providing an overview of the approach:

The best part of the 10-80-10 Principle is that you can apply it to so many different facets of life. You can apply it to organizations, groups, and your own individuals behaviors. The basis of the approach teaches people to stop putting all their efforts into fixing bottom 10 behaviors, but rather empower and grow their top 10 behaviors. This way – the majority 80 behaviors that are more easily influenced will shift towards the top 10 rather than the bottom 10.

Here is a really great example related to healthy eating and physical activity that really resonated with me. Sunjay told us that at one point in his life he was overweight. He realized that he was not making the best decisions he could for his health and wellness and he wanted to address it. He then spent some time thinking about his behaviors and categorizing them into top 10 and bottom 10. He felt that one of his top 10 behaviors was taking 2-3 20 minute walks per week with his wife. This was something that was positively influencing his health and wellness. When it came to his bottom 10 behaviors he felt that the fact that he ate at McDonald’s multiple times per week was a contributor to being overweight. Simple, right?

Once you’ve identified your top 10 and bottom 10 behaviors you then have to neutralize the bottom ten and empower the top 10. For him, this meant making a clear cut rule about eating at McDonald’s. From now on – he would only eat there once per week. This was something he was comfortable with and could comply with. He could now put the minimum amount of time, energy, attention and thought into that behavior so that he was no longer concerned with it and it no longer pulled him from his desired result.

Next, he empowered his top 10. He found ways to grow the behavior of walking with his wife by spending more time, energy, attention thought and resources on it. This would look different for everyone, but for him this was going for longer and more frequent walks. When he got to a point where he was walking 30 minutes per day, he decided that he would increase the intensity by running for as long as he could and then walking the remaining time. Eventually, Sunjay complete a marathon.

Because of his increase in physical activity he found other behaviors were shifting in his life. When he would come back from a walk or a run he found that he was thirsty and craving water. In the past, when he felt thirsty he would gravitate towards soda. Now, he was choosing water more often. Also, he found his food cravings change. He craved an orange. He had never craved an orange before in his life. The majority 80 behaviors were following suit of the top 10. Over time your behaviors shift in a positive direction that is closer and closer to your goal.

As a Dietitian, I often find myself trying to isolate negative behaviors and teaching individuals how to change those. But now, I see the value instead in focusing on the positive behaviors and empowering them to grow.

I encourage you to visit Sunjay’s website and learn more about his approach. And, if you ever get the chance to see him speak – I would run (not walk) to hear what he has to say!